The Challenges Hospitals Face with the Rise in Active Shooter Incidents

With the increase in active shooter incidents across the U.S., hospitals have another vital role to play beyond their day-to-day responsibilities for the health and wellness of the community. Hospital administrators and staff members must also rise to the challenge of keeping patients, visitors, each other, and themselves safe amid growing threats of violence and a startling number of active shooter events.

Hospital facilities and surrounding campuses, however, have seen a dramatic uptick in incidents that meet the FBI’s description, including recent attacks in Chicago, Boston, New Orleans, the Central Florida Coast, and San Bernadino, among others.

Let’s take a closer look at the unique challenges hospital systems must confront when addressing the possibility of an active shooter attack, along with some available solutions to help prevent and deal with these tragic scenarios.

The problem healthcare facilities face with active shooter incidents is complex and multi-layered. The first thing to understand is that hospitals are considered “soft targets.” Because hospitals have a large number of visitors, patients, and medical staff in one place, a shooting incident can quickly result in mass casualties.

Emergency Departments —When an active shooter attack occurs in an ER, hospital staff focus must shift from treatment of ill and injured patients to protecting the safety of themselves and others.

Labs — Exposure to lethal chemicals and microorganisms may occur during an active shooting incident.

MRI Suites — MRI machines function by using high-powered magnets. Metal objects can become projectiles and drawn into an MRI machine, resulting in harm to the patient or staff and causing costly equipment damage.

Because of the very nature of a hospital environment, the density of people, the focus on the various tasks at hand, and the complex design and layout of their facilities, the only way to combat an active shooter incident is by developing a plan that covers all three phases of an event.

The three phases of an active shooter incident are defined as before, during, and after an event.

An effective prevention plan will cover how to recognize warning signs before an active shooter incident begins, in an effort to prevent an attack. The preparation section will provide details establishing how to report that an attack is underway, and procedures to evacuate, perform lockdown, and communicate as an incident unfolds.

A response plan will inform staff on how to take action throughout an active shooter incident. It covers a multitude of scenarios, and all of the options staff members may have during each situation. Typically, recommended actions come down to run, hide, or fight. After the shooter has been neutralized, a procedure will be established for staff members to help those in need of assistance.

After an active shooter incident, the physical and emotional recovery process can last for months or years. Along with medical treatment and counseling for victims, their family members and friends, hospital staff, and witnesses, the hospital will have numerous responsibilities and will incur costs over time. Funeral expenses, victim/family monetary settlements, crisis management teams, facility damage, reputation management – everything that goes into recovery. Active shooter incident insurance should be an essential part of any effective hospital recovery plan. 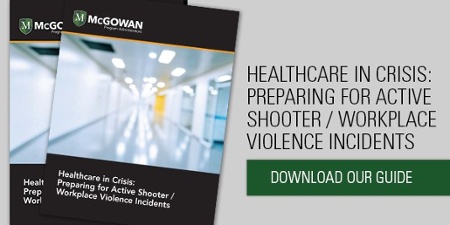 Ensuring your organization is prepared

Hospitals across the U.S. are working diligently to prepare for an active shooter event by implementing ongoing staff training programs and upgrading their technology and security systems. Equally important is having the right insurance in place to handle the aftermath of an event.

An active shooter insurance policy, when combined with your hospital's general liability insurance, gives your organization the added protection it needs to get back to standard operations after an event without significant financial strain.

As Paul Marshall, Director of Active Shooter and Workplace Violence Insurance Programs, points out: "The 'duty to defend' clause in commercial general liability policies means victims have to sue an organization and win a lawsuit, even if the organization has good intentions and wants victims to be taken care of."

Hospitals need to protect their organization, their patients, and their employees with active shooter incident insurance. Get started today. 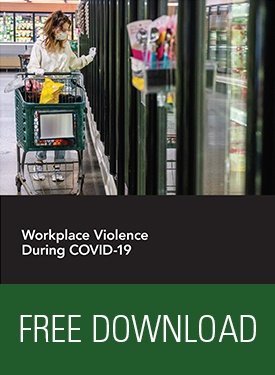